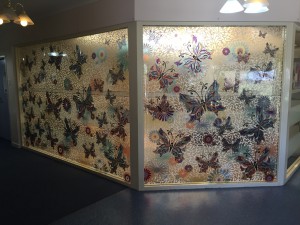 The beautiful window mural (concept designed by Visualcom) to depict butterflies which allows light to fill the room, but divides the two homes.

October marked the fourth month of Barunga Village implementing the ground-breaking model of dementia care developed in the United Kingdom more than 20 years ago – the Butterfly Household Model of Care. The model is a total transformation in the way people with dementia are cared for with a focus on their emotions, with the aim of increasing their quality of life. It involves a complete refurbishment of the interior spaces where they live, to ensure the rooms are colourful, highly engaging and emulating a home environment. Butterfly Home Care Coordinator, Louise Dewolf, said throughout October there have been major changes to the interior spaces of where the Butterfly Model residents will live. “The completion of these environmental changes have meant that in the last week of October we officially began the Butterfly Model of Care, which has been very exciting for the residents, their families and our staff,” she said. Louise said a key aspect of the model is developing small households to create family-like environments. “The residents are grouped in the houses with their fellow residents who are at similar levels of dementia to give them the best chance to thrive and have a sense of wellbeing, while enabling our staff to provide specialist skills in focused groups,” she said. “At Barunga Village 16 residents will be cared for under the Butterfly Model, with seven living in one house, and nine in the other, the new house names are Dale House and Eyre House.” Key refurbishments to the living areas include:

Louise said the staff are also undergoing a new approach to training, which focuses on their emotional intelligence called ‘Being a Star’ program. “At the start of the model’s implementation we appraised all the staff on their emotional intelligence to establish the appropriate house to which they will work in by matching them to the residents that live there,” she said. “We used resources from Dementia Care Matters (the organisation behind the Butterfly Model) to carry out the staff appraisals.” Louise said a select group of staff are dedicated to the Butterfly Model to ensure the continuation of care and there is also a fantastic group called the Home Action Team to help implement and model the new changes. The next information session to provide a progress update to families of residents on the Butterfly Model of Care will be held in the activity room at Barunga Village on Wednesday, November 9, at 2pm. Month five – November 2016 – of the model’s implementation will predominantly see a review of the changes put in place during month four. Louise thanks the residents, their families and friends, and the Barunga staff for all having a positive attitude about the changes associated with the Butterfly Model. 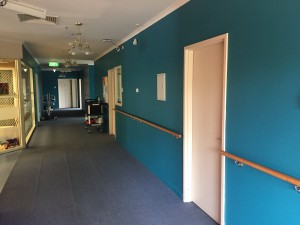 The interior walls have been painted to ensure the rooms are colourful and highly engaging.